Cow Butter is a popular dairy product made from cow’s milk. 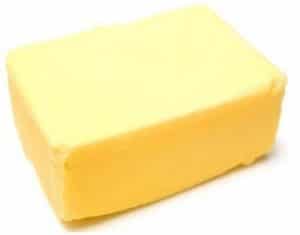 It is composed of milk fat that has been separated from other milk components. It has a rich flavour and is widely used for cooking, baking, or as a spread on bread. In the past few decades, cow butter has been unfairly blamed for cardiovascular disease due to its high saturated fat content. However, the public and scientific opinion has been slowly shifting in its favor, and many people now consider cow butter to be healthy.

Being mainly composed of fat, cow butter is a high-calorie food. One tablespoon of cow butter contains about 101 calories, which is similar to one medium-sized banana.

The table below contains detailed information on the different nutrients in butter.

Butter is about 80% fat, and the rest is mostly water.

Basically, it is the fatty portion of milk that has been isolated from the protein and carbs.

Butter is one of the most complex of all dietary fats, containing more than 400 different fatty acids.

It is very high in saturated (about 70%) fatty acids, and contains a fair amount of monounsaturated fatty acids (about 25%).

Polyunsaturated fats are only present in minimal amounts, constituting around 2.3% of the total fat content.

Other types of fatty substances found in butter include cholesterol and phospholipids.

Around 11% of the saturated fatty acids in cow butter are short-chain (1), the most common of which is butyric acid.

Butyric acid is a unique component of the milk fat of ruminant animals, such as cattle, sheep and goats.

Butyrate, which is a form of butyric acid, has been shown to reduce inflammation in the digestive system and has been used as a treatment for Crohn’s disease.

Unlike trans fats in processed foods, dairy trans fats are considered to be healthy.

Cow Butter is the richest dietary source of dairy trans fats, also called ruminant trans fats, the most common of which are vaccenic acid and conjugated linoleic acid or CLA.

CLA is a family of trans fats that has been associated with various health benefits.

Studies in animals, and human cells in laboratory culture, indicate that CLA may protect against certain types of cancer

CLA may also promote weight loss in humans, and is actually sold as a weight loss supplement. However, not all studies support this.

In addition, there are some concerns with large doses of CLA supplements as they may have harmful effects on metabolic health.

Cow Butter is a rich source of several vitamins, especially those that are generally associated with fat.

The following vitamins are found in high amounts in butter:

However, butter doesn’t contribute much to the total daily intake of these vitamins because it is usually consumed in small amounts.

A few years ago, cow butter was considered to be unhealthy, mostly due to the high saturated fat content.

However, the public and scientific opinion is slowly shifting in favor of cow butter consumption.

Cardiovascular disease is one of the leading causes of death in modern society.

The relationship between saturated fats and cardiovascular disease has been a controversial topic for several decades.

It is well known that a high intake of saturated fat can increase levels of cholesterol in the blood, which is a risk factor for cardiovascular disease.

However, it is not necessarily the amount of cholesterol that is a cause for concern. The blood lipid profile, or the type of lipoprotein cholesterol is carried around in, is much more important.

Intake of saturated fats can actually improve the blood lipid profile in many ways:

Many studies have failed to find a link between saturated fat intake and cardiovascular disease.

In fact, many studies have actually found the intake of high-fat dairy products to be beneficial for cardiovascular health.

However, most of the studies used “regular” amounts. It is possible that consuming large amounts (for example, adding butter to your coffee) can be problematic.

Many people believe that cow butter is fattening because it is high in fat and calories.

However, this doesn’t seem to be true when cow butter is eaten in normal amounts, as a part of a healthy diet. A review of the evidence found that high-fat dairy products (like butter) were linked to a reduced risk of obesity.

That being said, butter is not a food that should be consumed in large amounts.

It is almost pure fat and should only be used to complement meals, as a cooking fat or spread, or as a part of recipes.

In other words, butter should be eaten with a meal, not as the meal.

In conventional amounts, butter does not have many known adverse health effects.

However, eating butter in large amounts may very well lead to weight gain and associated health problems, especially in the context of a high calorie diet.

Although cow butter is very low in protein, it still contains enough of the allergenic whey proteins to cause reactions.

Therefore, people with milk allergy should be careful with butter, or avoid it altogether.

Cow Butter contains only trace amounts of lactose, so moderate consumption should be safe for most lactose intolerant people.

Cultured butter (made from fermented milk) and clarified butter contain even less lactose and may be more suitable.

The first step in the production of butter involves separating the cream from the milk.

In the past, milk was simply left standing until the cream rose to the surface, from where it was skimmed.

This happens because fat is lighter than the other milk components.

In the next step, butter is produced from cream in a process called churning.

Churning involves shaking the cream until the milk fat (butter) clumps together and separates from the liquid portion (buttermilk).

When the buttermilk has been drained off, the butter is churned further until it becomes ready for packaging.

It is mainly composed of fat, but is also a rich source of many vitamins, especially vitamins A, E, D, and K2.

However, butter is almost pure fat, and is not particularly nutritious when considering the high amount of calories.

Due to its high saturated fat content, it has been blamed for increased risk for overweight and heart disease.

However, several studies point to the contrary. Moderate consumption of butter may actually have a number of health benefits.

At the end of the day, butter may be healthy in moderation, but excessive consumption should be avoided.