Coconut oil is used extensively in tropical countries especially India, Sri Lanka, Thailand, Philippines etc., which have a good production of coconut oil. At one time, the oil was also popular in western countries like the United States and Canada, but there was a strong propaganda campaign in the 1970s spread by the corn oil and soy oil industry against coconut oil. Coconut oil was considered harmful for the human body due to its high saturated fat content until the last decade (2000s) when people began to question the claims of the propaganda. Let’s look into some more details of how coconut oil works in our body.

Saturated fatty acids: Most of them are medium chain triglycerides, which are supposed to assimilate well in the body’s systems.

Poly-phenols: Coconut contains Gallic acid, which is also known as phenolic acid. These polyphenols are responsible for the fragrance and the taste of coconut oil and Virgin Coconut Oil is rich in these polyphenols.

Vitamins and Minerals: Vitamin E, vitamin K and minerals such as iron. 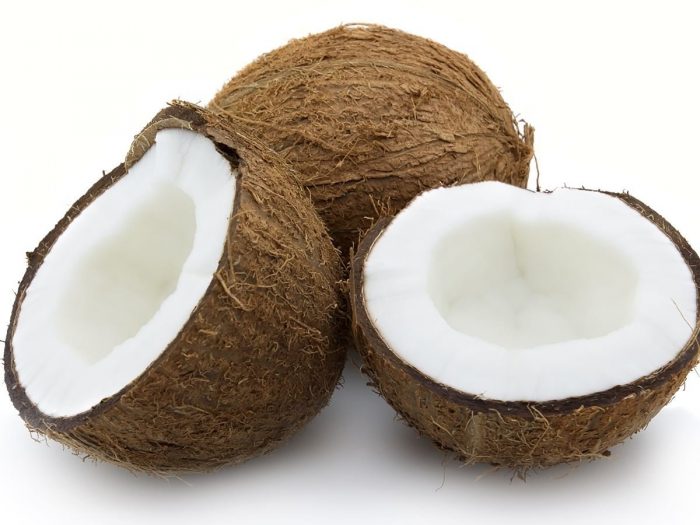 Skin care: Coconut oil is excellent massage oil that acts as an effective moisturizer on all types of skin, including dry skin. Unlike mineral oil, there is no chance of having any adverse side effects on the skin from the application of coconut oil. Coconut oil therefore is a safe solution for preventing dryness and flaking of skin. It also delays the appearance of wrinkles and sagging of skin, which normally accompany aging.

Coconut oil helps in preventing degenerative diseases premature aging due to its well-known antioxidant properties. It also helps in treating various skin problems including psoriasis, dermatitis, eczema and other skin infections. For that exact reason, coconut oil forms the base ingredient of various body care products like soaps, lotions, and creams that are used for skin care.

Hair care: Coconut oil helps in healthy growth of hair and gives your hair a shiny quality. It is also highly effective in reducing protein loss, which can lead to various unattractive or unhealthy qualities in your hair. Coconut is used as hair care oil and is used in manufacturing various conditioners and dandruff relief creams. It is normally applied topically for hair care.

Coconut oil is extensively used in the Indian sub-continent for hair care. It is an excellent conditioner and helps the re-growth process of damaged hair. It also provides the essential proteins required for nourishing and healing damaged hair. Research studies indicate that coconut oil provides better protection to hair from damage caused by hygral fatigue.

By regularly massaging your head with coconut oil, you can ensure that your scalp is free of dandruff, even if your scalp is chronically dry. It also helps in keeping your hair and scalp free from lice and lice eggs.

Heart diseases: There is a misconception spread among many people that coconut oil is not good for heart health. This is because it contains a large quantity of saturated fats. In reality, coconut oil is beneficial for the heart. It contains about 50% lauric acid, which helps in actively preventing various heart problems like high cholesterol levels and high blood pressure. Coconut oil does not lead to increase in LDL levels, and it reduces the incidence of injury and damage to arteries and therefore helps in preventing atherosclerosis. Studysuggests that intake of coconut oil may help to maintain healthy lipid profiles in pre-menopausal women.

Weight loss: Coconut oil is very useful for weight loss. It contains short and medium-chain fatty acids that help in taking off excessive weight. Research suggests that coconut oil helps to reduce abdominal obesity in women. It is also easy to digest and it helps in healthy functioning of the thyroid and endocrine system. Further, it increases the body’s metabolic rate by removing stress on the pancreas, thereby burning more energy and helping obese and overweight people lose the weight. Hence, people living in tropical coastal areas, who use coconut oil every day as their primary cooking oil, are normally not fat, obese or overweight.

Immunity: Coconut oil strengthens the immune system because it contains antimicrobial lipids, lauric acid, capric acid and caprylic acid, which have antifungal, antibacterial and antiviral properties. The human body converts lauric acid into monolaurin which research has supported as an effective way to deal with viruses and bacteria that cause diseases like herpes, influenza, cytomegalovirus, and even HIV. Coconut oil helps in fighting harmful bacteria like listeria monocytogenes and helicobacter pylori, and harmful protozoa such as giardia lamblia.

Digestion: Internal functions of coconut oil occur primarily due to it being used as cooking oil. Coconut oil helps to improve the digestive system and thus prevents various stomach and digestion-related problems including irritable bowel syndrome. The saturated fats present in coconut oil have antimicrobial properties and help in dealing with various bacteria, fungi, and parasites that can cause indigestion. Coconut oil also helps in the absorption of other nutrients such as vitamins, minerals and amino acids.

Further, unlike other pharmaceutical treatments for candida, the effects of coconut oil is gradual and not drastic or sudden, which gives the patient an appropriate amount of time to get used to the withdrawal symptoms or Herxheimer Reactions (the name given to the symptoms accompanying body’s rejection of toxins generated during elimination of these fungi). But, in the treatment of this condition, people should systematically and gradually increase their dosages of coconut oil and shouldn’t initially start with a large quantity.

Healing and Infections: When applied to infected areas, coconut oil forms a chemical layer that protects the infected body part from external dust, air, fungi, bacteria and viruses. Coconut oil is highly effective on bruises because it speeds up the healing process of damaged tissues.

According to the Coconut Research Center, coconut oil kills the viruses that cause influenza, measles, hepatitis, herpes, SARS, and other serious health risks. It also kills bacteria that cause ulcers, throat infections, urinary tract infections, pneumonia, and gonorrhoea. Finally, coconut oil is also effective in the elimination of fungi and yeast that cause ringworm, athlete’s foot, thrush, and diaper rash.

Coconut oil is strongly recommended for a number of other benefits that are explained below. Using coconut oils has been shown to mildly help the following:

Liver: The presence of medium chain triglycerides and fatty acids helps in preventing liver diseases because those substances are easily converted into energy when they reach the liver, thus reducing the work load of the liver and also preventing accumulation of fat.

Pancreatitis: Coconut oil is also believed to be useful in treating pancreatitis.

Stress relief: Coconut oil is very soothing and hence it helps in removing stress. Applying coconut oil to the head, followed by a gentle massage, helps to eliminate mental fatigue. According to research virgin coconut oil gives relief from stress and has antioxidant properties.

Bones: As mentioned earlier, coconut oil improves the ability of our body to absorb important minerals. These include calcium and magnesium, which are necessary for the development of bones. Thus, coconut oil is very useful to women who are prone to osteoporosis after middle age.

HIV and cancer: It is believed that coconut oil plays an instrumental role in reducing a person’s viral susceptibility for HIV and cancer patients. Preliminary research has shown an indication of this effect of coconut oil on reducing the viral load of HIV patients.

Coconut oil is often used by athletes, body builders and by those who are dieting. The reason behind this being that coconut oil contains less calories than other oils, its fat content is easily converted into energy, and it does not lead to accumulation of fat in the heart and arteries. Coconut oil helps boost energy and endurance, and generally enhances the performance of athletes.

Carrier oils are those oils, which easily penetrate or absorb into the skin and thus facilitate seepage or absorption of other oils (such as essential oils) and herbal extracts through the skin when mixed into it. Coconut oil is easily absorbed through the skin’s pores and thus is used as carrier oil. Furthermore, being one of the most stable oils, it doesn’t go rancid, nor does it let the other oils, herbal extracts, or medicines spoil inside of it. Coconut oil does not alter the properties of the oils and herbs mixed within it. Coconut oil also protects the herbs and oils from microbial or fungal interactions. Coconut oil is expensive in several countries; however, in tropical countries its cost is low enough to make it affordable as carrier oil.